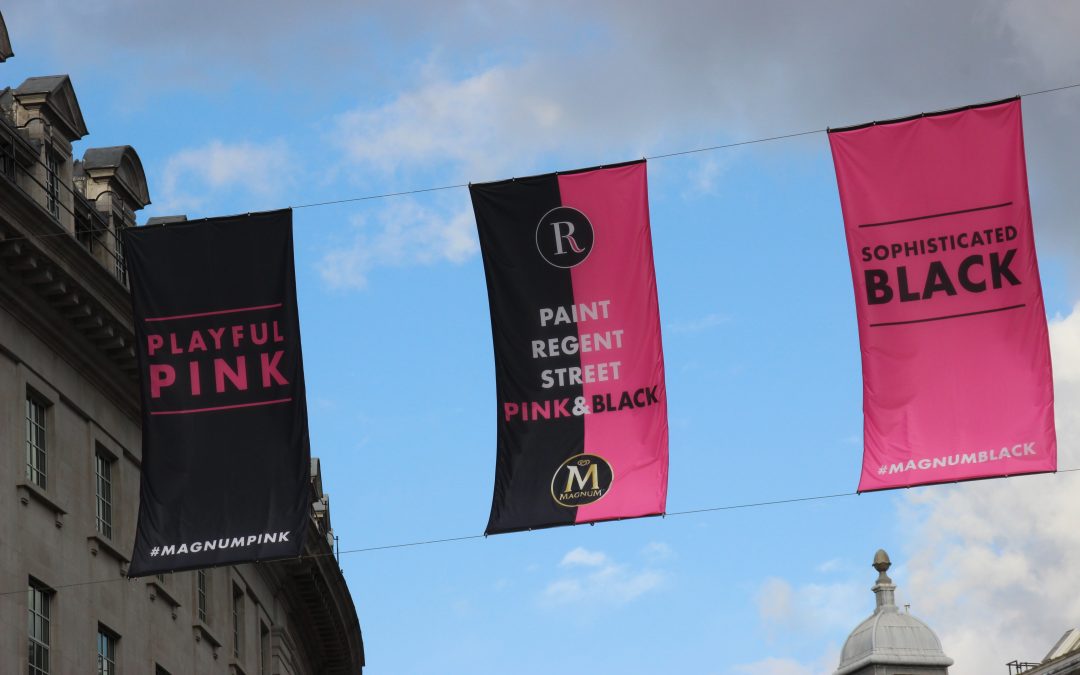 Now I know every girl is supposed to love Ice Cream but I think that my love is more of an obsession, so when I heard about the Magnum Pink and Black event I added it straight to my schedule. It was everything a female could ask for with free Ice Cream, Fashion, Shopping, Food and Music and to top off my day Magnum invited Antoine and myself to their VIP Pink and Black Bus. Sadly I never got to participate in their area with a plastic dome filled with confetti or the swings but I still had an amazing time as I walked along our well known closed off Regent Street.

So as per usual with me I arrived quite late (as I was working before hand) to the party but I still got a chance to catch everything. Antoine and I started at one side of Regent Street where we were greeted by a massive Magnum Black Ice Cream which was a marker for where the fun began. We continued to walk along Regent Street and were greeted by a lovely Street Team who gave us a flyer and also told us that we could get some free ice cream. After saying Thank you, I had a peek at the flyer and noticed all the stores that were doing discounts including the Food shops. After watching a 30 minute fun fashion Show which had some clothes from the surrounding shops Antoine and I headed to Aubaine in the Food Quarter where he had two mini burgers and I had Salmon with Risotto. Trust me it was delicious I will definitely be going back and it wasn’t that expensive either.

After the delicious food we headed back to Regent Street to go and get our free Ice Cream and at this point I thought I would tweet our photo that David Carvalho my photographer had taken of us earlier that week. I was very pleased when Magnum UK tweeted me back and invited Antoine and I to go to their VIP Pink and Black Bus. We strolled along the street until we found the bus and it looked amazing, parked across the road there were 2 lovely stewardesses that gave us our VIP wristbands and invited us into the garden. There were flowers and Magnum cushions in a makeshift garden area, which was just in front of the Magnum Pink and Black Bus. We climbed aboard and Antoine headed straight upstairs where we sat until one of the lovely girls brought us some Pink Lemonade, there was alcohol but I was being good considering who my company was. We stayed on the bus for about 15-20 minutes watching the crowd but I could see a lot of people a short way down the street dancing so Antoine and I decided to go and join them. We said goodbye to the Magnum Pink and Black Bus and the lovely ladies who had served us and went and joined the Street Party with the DJ. Everyone was having the time of their lives and the DJ was playing some great songs including Wonderwall by Oasis, but a House version. I spent the rest of my time at the event in this area as we all know how much I love music and people who make good music (Clubs and Spades).

When it hit 7pm it was officially time to go home and everyone was tidying up, I was sad that it was over but I then spotted the Big Pink Magnum that marked the other end of the road. I quickly took a picture of it and headed back to the Tube Station. When I first found out about the event I had no idea what to expect but Magnum put on a good show and like I said the only thing I wish I had the chance to do was the swings and plastic domes in the section designed by Mollie King from, The Saturdays. As for the Ice Cream I would definitely say I love the Pink One but tweet me, let me know which one you like. Lastly I hope that the vote they had on the colour of the London Eye tonight will mean that it is will be lit up with Pink too, how beautiful would a Pink London Eye be?