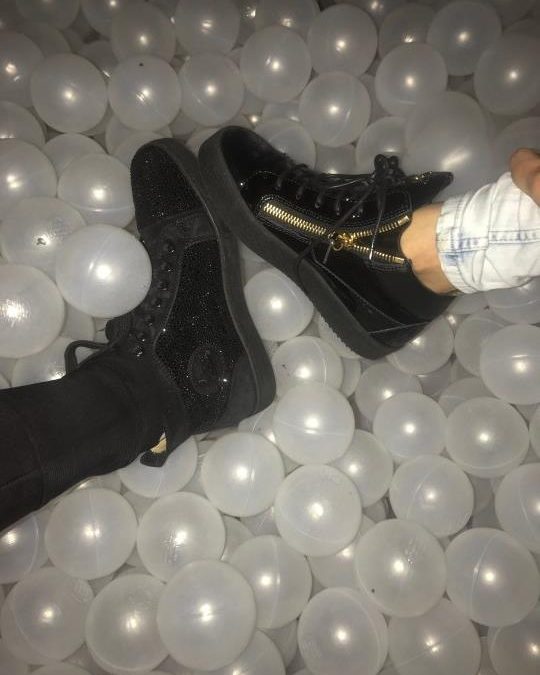 It was a typical Thursday night in Shoreditch except I was drinking a cocktail at an adult Ball Pit. Every adult has an inner child so when I was invited to Ballie Ballerson for my friend’s birthday it was an instant “YES”. Located on Curtain Road, the venue is easily located, unless you’re using Waze, which took Jade and I to the opposite end of the road and we had to stroll back.

Ballie Ballerson has one private room for rental which looked epic and a public room for anyone who buys a ticket on their website. There are a few tickets left on the door, so we risked it and luckily for us, they still had some available. We were greeted by some lovely door staff and paid our entry for 2 hours in the Ball Pit. Whilst we waited for our friends we headed to the Bar, I had not actually looked into Ballie Ballerson before I went there, so the sweety cocktails were a nice surprise. After a strong moment of indecisiveness on my part I was torn between a Dibbie Dabbie (Strawberry Gin, Cranberry and Cherry) and a skittle sour (Tanquery Gin infused with Skittles and Southern Comfort) I went with my favourite fruit, Strawberry. Did I also mention that the drinks come with sweeties? So I sat there drinking my Dibbie Dabbie and eating a Dib Dab at the same time. Once Jade and I had finished our cocktails (she copied me so I couldn’t try her drink) our other friends had arrived and the birthday boy, Tyrone. It was finally time to get into the ball Pit and from a distance it looked a little bit scary, imagine a room full of Balls and adults having a ball fight. I travelled down the stairs with Jade into the Pit, sweaty palms and all and although I wanted to dive in I stepped tentatively around the other Ballers. We were immediately met with a girl who had lost her phone, that gave us our lesson for the evening, Do not keep anything in your pocket when you are in the Ball Pit! We tried to help her find it and although Jade found a Fit Bit, alas the phone was gone. Not to worry though because they clean the balls every night and the next day she phoned us to say she had picked it up.

Now in my eyes the first thing you do when you are surrounded by Balls is one of two things. Dive in or take a selfie, well I did the first one, so I laid back under the sea of white balls and stuck my Louboutins in the air for Jade to take a photo for me. By the time I was ready to take a selfie (courtesy of My Bandage Dress from VIP Fashion Boutique) Jade was nowhere to be found, or so I thought. By the time I finished taking my final selfie Jade was in my ear asking where have you been. I smiled at her; you know that Colgate grin, “I was taking a selfie”.

“Did you not see my foot in the air?” she replied “I was attacked”. My smile may have toned down slightly at this point because I never realised how much she meant until we went back and looked at my live photos on the iPhone. They clearly showed her foot in the air and the onslaught on balls as I am trying to get that perfect Selfie. I can’t lie though I did get a very pretty picture and there was also a giant teddy bear whose lap I parked myself on for another photo. She got her revenge, I was stood in the naughty corner for a photo of my ‘Ish Couture’ jacket and she kept me their well after all the photos had been taken. When I turned around everyone was laughing because they were wondering how long it would take me to realise that they’d finished taking pictures.

Not wanting to be out too late we left at an early 22.30 although Ballie Ballerson is open until 12am Wednesday and Thursday and until 2am Friday and Saturday. I had ordered my cab so luckily we jumped straight in and spoke all the way home about how much fun we’d had at Ballie Ballerson. So if you are a big child like me, or you want to unleash your inner child then I would definitely recommend checking out Ballie Ballerson!