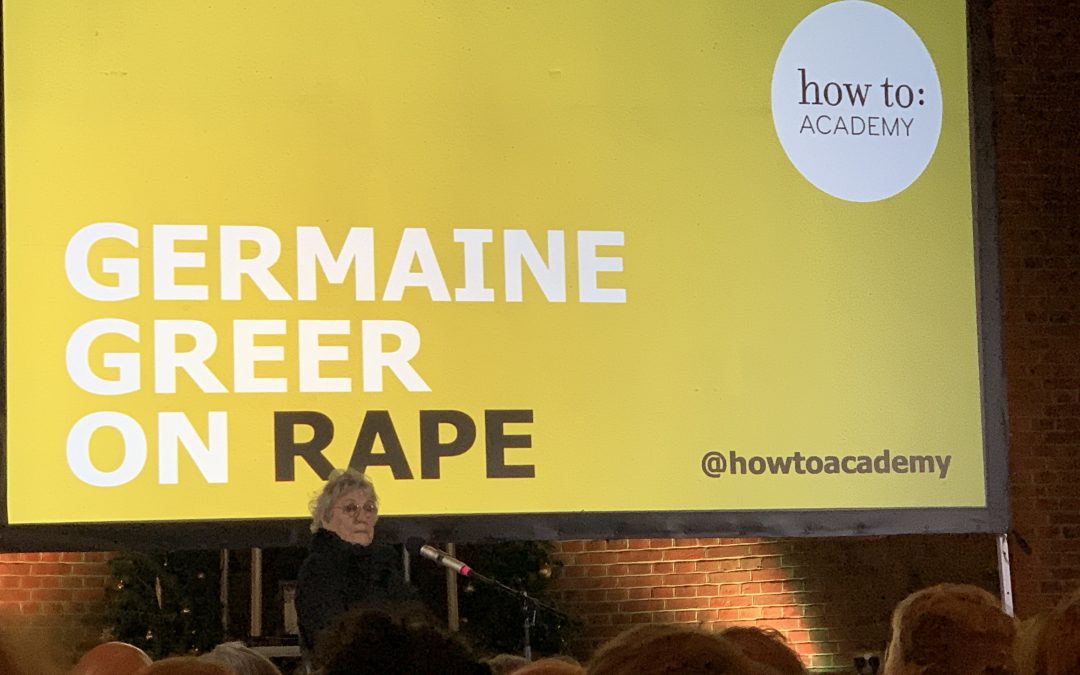 I entered the Emmanual Centre in the heart of Westminster not knowing what to expect. The Emmanuel Centre had the atmosphere and architecture of a church, which was somewhat comforting to me as the topic of rape is serious.

I walked into a huge hall with bible quotes written above the stage, both men and women filled the seats as I squeezed myself amongst the murmur of excitement. I overheard two women discussing the fact that Germaine spoke of women tasting their menstrual blood in her book ‘The Female Eunuch’ released in 1970.

One saying “She said you’re not a woman if you don’t taste your own blood.” to which her friend replied “Sod it, I’d rather not be one.”

It was then that I grasped the idea of what I was about to embark on with Germaine Greer.

Who Is Germaine Greer?

Germaine Greer is an author who is known as one of the major voices of the second-wave feminist movement. Her controversial views on feminism and rape put her in the tabloids many times. She is most known for her book ‘The Female Eunuch’. In the book Greer wrote “If you think you are emancipated, you might consider the idea of tasting your own menstrual blood- if it makes you sick, you’ve got a long way to go baby.” which is what the ladies behind me were discussing. 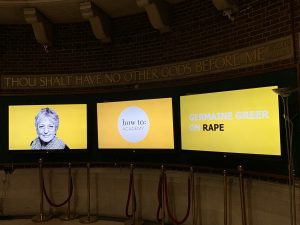 Greer walked onto the stage while receiving a huge round of applause and started her talk with how she was coming to grasp with old age and how her journey of exploring the definition of rape has been so far.

Her views on rape were that sexual assault and rape are separated but their closeness should not be ignored. Rape being the act of wavering consent going back to the Latin meaning of ‘rapture’.

“People are chorusing that rape is a violent act, you have to be cut and torn but otherwise if theres no blood then theres no rape. It’s completely wrong.”

Greer spoke on historical references and paintings such as The Rape of the Daughters of Leucippus by Peter Paul Rubens in 1618 and The Rape of The Sabines in 1639 and how the story of the women were moralised and as it was being glorified to an extent. Both images of rape is about the carrying off of women as objects.

This made me realise that rape is something women have been experiencing since the beginning of time. However, when listening to her talk I was wary to what her actual views were because of previous articles I had read.

She spoke about the Harvey Weinstein ‘Me Too’ Movement where actresses are coming forward with allegations of sexual abuse by the film producer.

“The ending to this is going to be the same as Brexit. A disaster we saw coming.”

Germaine then discussed the story of a teenage girl who was ganged raped by five men. The men named themselves ‘La Manada’ which is spanish for Wolf Pack, they were found guilty of the lesser offence of sexual abuse.

Each were sentenced to nine years’ imprisonment, five years’ probation and ordered to pay €10,000 each to the woman. She brought forward the question of whether rape is on the same level as murder because of the sentences handed out, her point saying nine years is a very long time.

This was a shock to me as although it brought forward a question, it is one I can simply answer with no hesitation… yes.

The talk left me with a clearer understanding of how the world can perceive rape and rape culture. I also left with an urge for justice for all women who have gone through it and I feel empowered that one day survivors will be able to come forward with no hesitation.